December 2012  Recent research by the group has been highlighted in the Editor’s choice section of the December issue of Science.

The paper reports on a new technique of electrophoretic deposition to deposit and order individual nanoparticles into large structures. The paper shows that control over net particle charge and dipole leads to the formation of well-ordered, tightly packed multilayers of vertically aligned rods. The technique will be used in the development of new materials for use in photovoltaic cells.

On October 3rd and 4th the Intel Ireland Research Conference took place in Croke Park, Dublin Ireland. The conference, which forms part of the ERIC (European Research and Innovation Conference) Series 2012, brought together more than 150 delegates from across Europe representing enterprise, academia and policy makers. The event, which is held annually in the region, is an important building block in driving a world-class ecosystem in Europe for research, innovation and collaboration.

The theme of this year’s conference was ‘Building a smart, sustainable and inclusive society through research and innovation partnerships’ and provided delegates with the chance to discuss and identify opportunities for tackling the challenges facing society. This 2 day event comprised of keynote speaking sessions on Day 1 along with three relevant research focus areas on Day 2 –

Research led by the Materials and Surface Science Institute (MSSI) at the University of Limerick has developed a cost effective solution to generate innovative solar energy conversion materials. The research project recently received further government support through a €700,000 Science Foundation Ireland grant. The solar industry is worth over €100 billion globally and is the fastest growing energy sector. Despite this, the world’s energy requirements which are currently met by solar is less than 1%, which is primarily due to the high cost of production of efficient photovoltaic cells. 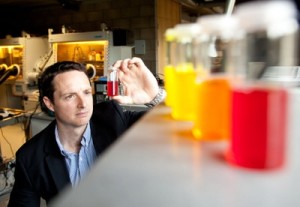 Current silicon-based commercial solar cells are very costly to process whereas alternative technologies rely on toxic materials such as cadmium or tellurium. The most sought after materials currently for solar energy conversion are copper-indium-galium-disulfide (CIGS) and di-copper-zinc-tin-tetrasulphide (CZTS). By combining the four elements in each material in the correct combination, very high conversion of solar energy to electricity can be obtained. CIGS cells have shown the highest possible efficiencies whereas CZTS though marginally lower are regarded in the industry as being equally attractive for large scale commercialisation as each of the elements are in high natural abu

ndance. The barrier to application is that current methods of making these materials requires very expensive technologies

Lead researcher, Dr Kevin M Ryan, explains; “This technology has significant impacts for energy generation world-wide. We have developed a low-cost laboratory method of forming both CIGS and CZTS in nanorod form which can maximise solar absorption. 250 billion of these rods for example will fit on the head of a pin and our technology essentially allows us process these as an ink to form densely packed forests of these nanorods over very large areas optimised to harness the abundant solar power available.”

This research was funded by Science Foundation Ireland (SFI) through the principal investigator programme to Dr Kevin Ryan and also through funding from the SFI Strategic Research Cluster in Solar Energy Conversion involving University of Limerick, UCD and DCU. For further information go to www.ifnano.com 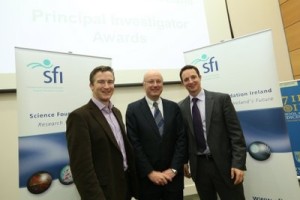 Making the announcement, Minister Bruton said: “Over the past decade, Ireland has built up a very substantial infrastructure and a reputation for basic scientific research, and many of the high-end jobs we have created in multinational and indigenous companies are directly related to these achievements. However, a central part of this Government’s plan for jobs and growth is to ensure that this research is better targeted at turning the good ideas of researchers into good products and good jobs. Already, investments of €700million from multinational companies in 2011 were in R&D – but we must do more.”

“To achieve this, we have introduced legislation to allow SFI to go beyond basic research to investigate commercial solutions; we have identified 14 areas which the Government is targeting for commercialisation; and we have adopted a series of reforms to make it easier to commercialise the results of State-funded research, including a one-stop-shop.

“Today, I am very happy to announce that the Government is investing a further €39million in 30 new research projects in areas which the Government has identified as having particular potential for jobs and growth, including ICT, health/life sciences and energy. What is particularly heartening is that much of this research is being done in collaboration with companies who are seeking to find new products and services, including Intel and Analog Devices. I congratulate SFI on their achievements; we must now build on this to ensure that even more of this work is translated into commercial products and services and ultimately the jobs we need”.

Welcoming the announcement, Seán Sherlock T.D., Minister of State with responsibility for Research and Innovation, commented, “Investment is key to ensuring that robust and results-driven research continues to take place and thrive here in Ireland. The funding announced today will help to bring the best of these research projects to the next level, creating impactful, innovative products and services for the Irish and international market.”

Also welcoming Minister Bruton’s PI funding announcement, Director-General of Science Foundation Ireland, Professor. Mark Ferguson, said, “The PI projects for 2012, selected following a highly-competitive, peer-reviewed process, are investigating some of the most important issues facing humanity today. From research into cancer, strokes and Alzheimer’s, to communication networks, next-generation thermoelectric devices and improving future flood risk predictions for Ireland among others, recipients have demonstrated both an in depth understanding and an ability to make measurable strides in their respective fields.”

Jul 2012 Tag rugby success for group members, Hugh, Emma, Claudia and Tom as part of  Tagtanium  made up of  graduate students from Faculty of Science and Engineering atUL 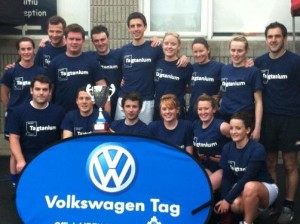 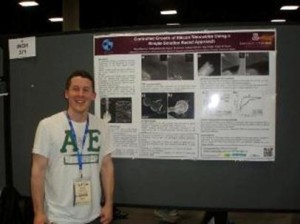 In May 2012, Hugh Geaney of MSSI was declared the winner of the Society of Chemical Industry  (SCI) Wesley Cocker Award for 2011 for his paper ‘High Density Germanium Nanowire Growth Directly From Copper Foil by Self Induced Solid Seeding’ which was published in Chemistry of Materials. This paper was the first report where high density germanium nanowire mats could be formed in a low cost solution based process. Hugh was presented with his award during the Irish Adhesion, Surface Coatings and Composites Conference which was hosted by MSSI. Professor Cocker (1908-2007) was instrumental in establishing the Irish Section of the Society of Chemical Industry in 1947. The award named in his honour is given to the best paper or patent on a topic of relevance to industrial chemistry, where the main author is a PhD or BSc student in Ireland, and is a member of the society. The Wesley Cocker Award aims to recognise a young scientist – PhD student or younger – in the Republic of Ireland who has made a major contribution in some aspect of chemistry relevant to Irish industry

Green Lion is an EU funded FP7 project with the goal of developing more environmentally friendly and cost effective materials and manufacturing processes for lithium ion batteries, with particular focus on electric vehicle applications. The project has a total budget of € 8.6 M over 4 years and encompasses 10 industrial partners, 3 research institutes and 3 universities, including UL, through the group of Dr Kevin Ryan in the MSSI.

In present Li ion technology, battery charging involves the intercalation of Li ions into graphite anode materials, with their release during discharge. Mechanical stability and electronic conductivity of the anode is achieved by the incorporation of polymeric binders. Li ion battery research in Dr Ryan’s group has two principal focuses. Firstly, it is sought to replace the currently used fluorine based binders with water soluble, naturally occurring polymers such as carboxymethylcellulose. This approach has both cost and environmental benefits, since fluorinated polymers are relatively expensive, not easily disposable at the end of battery life and, being insoluble, require the use of volatile and toxic organic solvents during processing.

The second aspect is related to the development of next generation anode charge storage materials. Germanium and silicon have theoretical charge storage capacities approximately four and eleven times that of graphite, respectively. However Li ion intercalation into these elements is accompanied by large volume increases leading to material pulverisation and dramatic decreases in performance over a number of charge/discharge cycles. This problem can be minimised by using nanoscale materials – in particular silicon and germanium nanowires, developed by Dr Ryan’s group, have exhibited the retention of excellent charge storage capacities over numerous cycles. Furthermore, these nanowires can be grown directly onto metallic charge collectors, thereby reducing the need for binding and conductivity enhancing agents.  Picture is of Greenlion consortium opening meeting in San Sebastian, included are Kevin Ryan and Tadhg Kennedy from group. 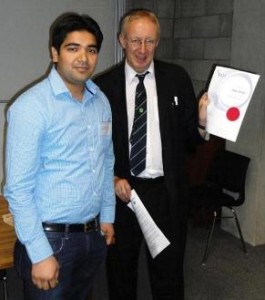 May 2011 Congratulations to Ajay , co-winner of the Society of Chemistry Wesley Cocker Award, 2011.

The Wesley Cocker Award aims to recognise a young scientist – PhD student or younger – in the Republic of Ireland who has made a major contribution in some aspect of chemistry relevant to Irish industry. Ajay’s first author paper in Chemical Communications (Chem Commun., 2010, 46,7193-719)was highly regarded by reviewers and resulted in Ajay being awarded the Wesley Cocker award. Ajay will share the €500 cash prize and a year’s SCI membership, paid for by the SCI All Ireland Group. Ireland Group, Dr David Birkett

August 2011 Pictured are some members of the research group who recently competed in the 2011 IRFU Tag All-Ireland Championship in Dublin.

From all over Ireland, 72 teams contested the All-Ireland title in their respective grades having qualified from tag rugby leagues in their region. After a fun filled yet gruelling 6 matches, the ‘Up’ n’Atoms’ emerged victorious and took away the top prize in their division.