On March 21/22, the Si-DRIVE consortium meet for the first time since the initiation of the project on January 1. Partners travelled from all over Europe to be at the meeting: Germany, Netherlands, Italy, France, Spain, Belgium, and Switzerland. The meeting was a great success and congratulations to all involved. 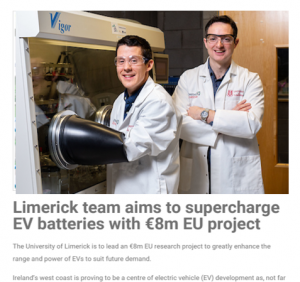 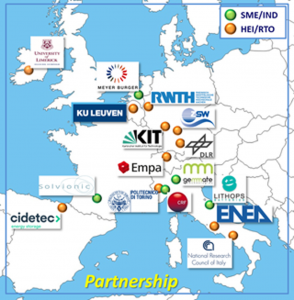 A team from the University of Limerick (UL) is taking on the challenge of making faster-charging, longer-lasting batteries for electric cars. The group, part of the UL Bernal Project, hopes to create batteries that charge up more quickly and hold onto that charge for longer, allowing electric vehicle drivers of to break free from current worries over ‘range anxiety’.

The Bernal Project is contributing to Si-DRIVE, an EU supported project fnded by €8 million from the Horizon2020 fund. Prof Kevin Ryan, leader of Si-DRIVE project explained: “We’re looking at a timeline of three-to-five years to go from the lab to consumer sales. Quite often there are trade offs between different performance requirements such as range, fast-charging, and lifetime. We have outlined new materials developments in all components of the battery – anode, cathode and electrolyte – such that in one battery technology we can simultaneously meet these performance challenges.”

The team is also working with the research arm of Fiat, Centro Ricerche Fiat (CRF), in order to specifically tailor the technology for use in cars.

A major part of the project will be finding ways to remove the need for rare-Earth elements, such as cobalt, from the design of the batteries. Cobalt recently hit the headlines when one of the primary source of the metal, a mine in the Democratic Republic of Congo, found that some of the supply had been contaminated by natural uranium. Prices for cobalt doubled last year, after a Volkswagen executive described the metal a crucial to future electric car plans, and concerns have been raised by Amnesty International over the work and employment practices of companies mining the metal.

Dr Hugh Geaney, researcher on the project said, on the subject of using rare metals for the batteries, that: “The Si-DRIVE project will bring together leading experts from across Europe to deliver the sustainable and cost-effective battery technology required for environmentally friendly EVs of the future.” The current thinking is that the cobalt used in the anodes and cathodes of the batteries (the contact points at which current flows in and out of the battery’s cells) could be replaced by a high-performance silicon.

The research will also work on replacing the current state-of-the-art liquid electrolyte found in batteries with a solid replacement. These so-called solid-state batteries can, theoretically, hold twice the amount of charge of a conventional battery, potentially doubling the range of a car. A solid electrolyte could also reduce, perhaps eliminate, the sort of ‘thermal runaway’ to which current batteries are prone, where their temperature runs out of control (usually because of damage to the battery housing) and which can cause a fire.

Dr Bob Flynn, the national contact point for the EU’s Horizon 2020 fund (from whence UL’s funding has come) at Enterprise Ireland welcomed the announcement, telling The Irish Times that: “’Si-Drive ranked first of all proposals submitted for this specific Horizon 2020 call and this success brings Irish researchers to the forefront of battery related research and technology development across Europe. Enterprise Ireland provided financial and technical support for the team to develop their proposal in line with our strategy for Horizon 2020 to support excellence in research with the objective of driving innovation and competitiveness across the Irish economy. To date Irish researchers and companies have successfully won €630m in approvals under Horizon 2020.”